Try the Free Math Solver or Scroll down to Tutorials!

Some Proofs of the Existence of Irrational Numbers

Geometric Proof of the Irrationality of

The ancient Greeks were some of the first mathematicians. However, instead
of approaching mathematical problems numerically or abstractly, the Greeks
were very concrete: they envisioned problems geometrically. They considered
numbers to be analogous to line segments. Two segments are considered commensurate
if and only if there exists some other segment called a "common
measure" which can be overlaid an integer number of times onto both. That is
pretty convoluted; it is easier to think of two segments as commensurate when
you can find some other "unit" segment to measure them both, where each has
integer length with respect to the segment of this "unit. 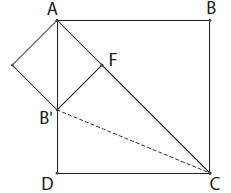 We start our proof from [2, p. 23], by constructing a square ABCD. Because
we are assuming the side and diagonal are commensurate for contradiction, we
shall denote the segment of common measure between the side AD and the
diagonal AC by e. To begin the proof, on the diagonal AC, starting from C,
measure out a segment congruent to AD

ΔCDB'
because both are right triangles, CD

CF, and they share the hypotenuse
CB'. We may therefore conclude that B'D

AF. Now, create a new
square with B'F and FA as sides. Note that the new diagonal is going to be
B'A. Since AC and FC

AD are commensurate by e, then so are AF
and B'A, one side of the new square and its diagonal.

Clearly, we can repeat this process of constructing a new square indefinitely,
with each new square strictly smaller than the last. Note also that, inductively,
the sides and diagonal of each new square are measured by our original e. This
is a contradiction by infinite descent: for example, suppose that |AC| = 1000e;
since each successive diagonal is measurable by e, and we can construct a
new diagonal indefinitely, the 1001st diagonal we construct will no longer be
commensurate by e.

We conclude that the side and diagonal of a square are incommensurable.
This is equivalent to stating that

is irrational: two line segments are com-
mensurable if and only if there exists another segment such that each of the
two initial segments is an integer multiple of that third one, i.e., that the ratio
of their lengths can be represented as a rational number. Hence, since the
diagonal and side of a square are incommensurable, their ratio,

, cannot be
represented as a ratio of two integers, and is therefore irrational. Incidentally,
it is to be noted that the discovery of irrational numbers shocked and startled
the Greeks: according to legend, the Pythagorean who first completed this
proof atoned by perishing in a shipwreck [2].

Algebraic Proof of the Irrationality of

We can take the essence of the geometric proof presented above and distill it
into an algebraic argument as follows.

To prove the irrationality of

by contradiction, we suppose it is rational.
Then consider the set

be the matching denominator for

. Now, we have, by subtracting

; however, this implies that

. This is a contradiction to the minimality of

The basic idea behind these first two proofs is to find some violation of the
Well-Ordering Principle: to show that if

invokes the Prime Factorization theorem in order to have the phrase "reduced-
form fraction" be well-defined; the two proofs presented above, however, do
not require this secondary result, and so are somewhat stronger than the most
common proof.

is not, of course, the only irrational number; it is possible
to show that some important numbers which naturally occur in geometry and
analysis are also irrational. For example, as seen in [1], let us consider the
natural exponential e. Given the MacLaurin expansion of ex, we see that

Suppose for contradiction that e =

Thus, because both terms in the final expression are integers, α ∈ Z. But
consider now that 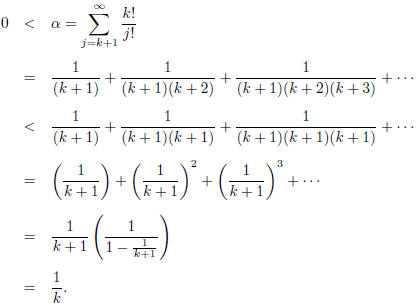 Since k > 1, we now have a startling and unsettling occurrence: the integer α
satisfies 0 < α < 1. This is our contradiction: e is therefore irrational.

Nearly as ubiquitous as e, but arising initially from geometric instead of analytic
considerations, is the number π, the ratio of any circle's circumference to its
diameter. This last proof (from [1, pp. 46–47], with some detail added), of
the irrationality of π, is rather more mysterious than the previously discussed
proofs. Several very conveniently chosen functions conspire to show that it is
impossible to write π or π2 as quotients of integers.

We begin by defining, for any positive integer n,

is rational, where a and b are positive integers.

Note that both G(0) and G(1) are integers. With a little algebra, we have 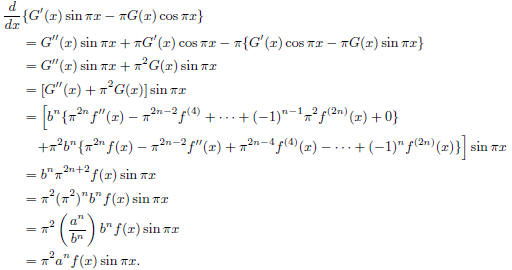 which is strictly less than 1 for large n.
This is our contradiction. Consequently, π2 is irrational, and so is π.